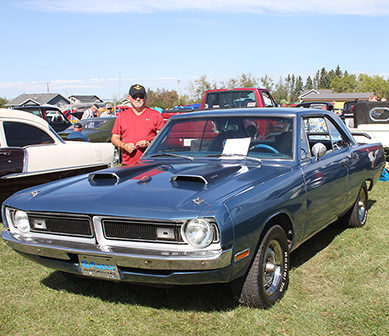 Coughlin glides on highway with Dart

Doug Coughlin returns to car shows with his 1970 Dodge Dart Swinger. Although the car looks original, he beefed up the car by adding a 383 engine for more power on the road.

“I’ve had this car for about 10 years. I found this car in Red Deer and at the time it had a 318 motor in it, which was the original engine. I found an engine that was built by a Lethbridge speed shop and put a 383 motor in it with a 727 stage two shift kit,” explained Doug.

“I wanted something that gives me 350 to 400 horsepower. I had the inside done by Camrose Upholstery and the body was done by Murray Henderson who is from the Camrose area somewhere,” he laughed.

Dodge Dart is a line of automobiles marketed by Dodge from the 1959 to 1976 model years in North America.

“It has been a labour of love. This is the first car show for me in four or five years (in Round Hill). Back in the day, I had one, a Dodge Dart, and I was actually looking for a B body, a Roadrunner or Satellite, but then I decided on this one. The body was in pretty good shape, so I grabbed it,” he recalled.

Often smaller cars with big engines were a hit because they were the fastest.

“I really like the horsepower in this car. It moves pretty good and I like the speed it offers. I have 323’s in the rear end, which is something I might change. The only thing I don’t like about this car is the rear end. I would like to change it to a 355 or a 370 just to give it a little more power from the get-go,” said Doug.

“I don’t drive this car very often. I should go to more car shows now. The front seats are out of a 2000 Dodge Dakota. They had bench seats before, so I’ve changed that out. There has been a lot of work that has gone into this vehicle. This is not the original colour. This is called an Atlantic Blue, which is similar to a Dodge Dakota that I owned. Normally, they come in three colours: B3, B5 and a B7. This is a B5 colour,” shared Doug.

Dodge went  with darker colours as the number went higher. B5 paint was often the most desirable because it reflected differently, depending on the lighting. It often glistens in the bright sunlight, great for car shows.

Darts were downsized large cars developed to replace Plymouths in the standard, low-priced car segment for the Dodge dealer network.

“This car is very fun to drive and I enjoy cruising with it,” he added.

The Dart was refreshed for 1970 with front and rear changes designed to bring the car closer to the design themes found in Dodge’s full-size vehicles through grille and contour changes. In the rear, the Dart’s new rectangular tail lights were set into a wedge-shaped rear bumper design continuing the angled trailing edge of the new deck lid and quarter panels.

Changes to the fuel system improved drivability, economy, and emission control. Part-throttle downshift was added to the eight-cylinder automatic transmissions. In compliance, side marker lights and reflectors were installed at all four corners. All 1970 Darts got the federally mandated steering column and ignition lock. The Swinger name was applied to all the Dart two-door hardtops except in the high-line custom series. Other changes were made to the Dart line to avoid internal competition with Dodge’s new Challenger: the Dart convertible was discontinued along with the optional 383 cubic inch (6.3 L) V8, leaving the 275 bhp (205 kW) 340 4-barrel V8 as the top Dart engine.

The performance model in the Dart line for 1970 was the Swinger 340 two-door hardtop. It came with functional hood scoops with 340 emblems. Standard equipment included front disc brakes (only on the Swinger), heavy-duty Rallye suspension, a 3.23:1 rear axle ratio, fiberglass-belted bias-ply tires and a bumblebee stripe.